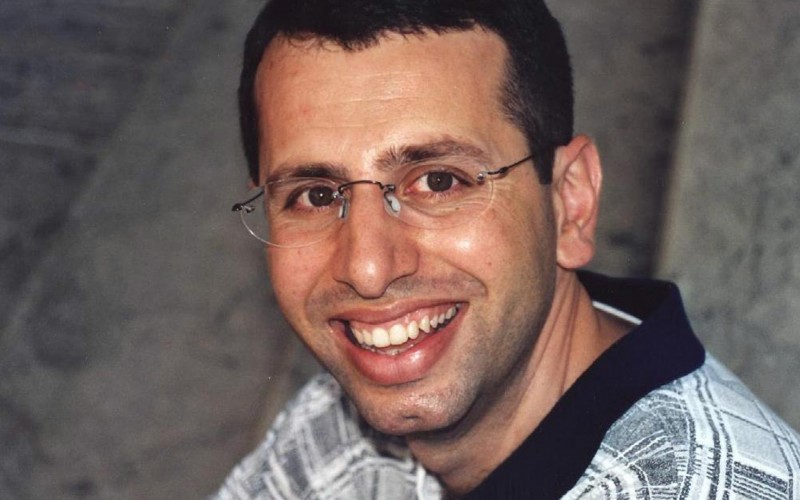 This undated photo of Chaldean Father Ragheed Aziz Ganni appeared on the Web site of AsiaNews with a story about his death. The priest and three subdeacons from Church of the Holy Spirit in Mosul, Iraq, were killed June 3, 2007, while leaving the church after Mass. AsiaNews reported that their car was blocked by a group of armed militants who shot the clergymen and then booby-trapped the car with explosives. (CNS photo/AsiaNews)

From The Catholic Sun

Corbishop Msgr. Felix Shabi, diocesan Vicar for the Chaldean Catholic Church of Arizona, remembers well the martyred Fr. Ragheed Ganni. The two men were cousins who grew up in Iraq. The Vatican recently opened the cause for the canonization of Fr. Ganni.
“He was five years older than me. Whenever they visited his grandfather’s house in our village of Karmless, we would see him. Starting with 1980’s He used to play soccer with us,” Msgr. Shabi said. “That’s what I remember. Then, he went to the university and entered the engineering school at Mosul. He was well-educated and became a sub-deacon in our Chaldean Church in Mosul. He was very active on the parish level.”
In the 1990’s, the Archbishop of Mosul at the time had great confidence in the young man who had such a heart for service. If there was not a priest available to say Mass in the outlying areas of the archdiocese, he would send his then-subdeacon, Ragheed Ganni.
“He would take consecrated hosts and he would go and do the whole Mass except the words of consecration and the epiclesis,” Msgr. Shabi said. “He was acting like a priest even before he went to Rome to enter the seminary. People really loved him for doing that.”
Msgr. Shabi said he saw his cousin when the two men were studying in Rome. Fr. Ganni was a seminarian at the time and Msgr. Shabi was pursuing his licentiate in the Eastern Canon Law.

During the summer break, Fr. Ganni would travel to Ireland to improve his English. He met the prime minister as well as a number of high-ranking officials and clergymen, yet he “never bragged about anything,” Msgr. Shabi said. “If he was with a child, he would deal with the child in the spirit of the child. He was open to deal with any situation and the first one to help in any situation.”
Msgr. Shabi returned to Rome in 2007 to pursue his doctoral studies when the he received the phone call that Fr. Ganni had been killed. “It was a tragic moment, killing a young priest.”
That morning, Fr. Ganni had visited the passport office to renew his papers… He had some pictures taken and gave his mother a copy, telling her that she would need it one day.
“Of course, he did not tell her about all the death threats,” Msgr. Shabi said.
The announcement that the Vatican has opened the cause for the canonization of Fr. Ganni and the three sub-deacons who were killed alongside him was welcome news to Msgr. Shabi and his congregation.
“It’s an honor and an immense joy,” Msgr. Shabi said, especially as it comes just as Pope Francis announced that the Chaldean Patriarch, Louis Sako, has been named a cardinal. Knowledge of the ongoing persecution of the Christians of Iraq is growing.
“Christians in the Middle East have been enduring a serious persecution and we have lost many, many Christians,” Msgr. Shabi said. “Hopefully Fr. Ragheed will be the first to be recognized in a long list of many other martyrs from the last 20 or 30 years, including Archbishop Paulos Rahho.” Archbishop Rahho was kidnapped and killed in 2008.
“Martyrdom is an ongoing history and tradition in our Church so in a way, it’s not a novelty. The Church is ready at all times to give witness,” Msgr. Shabi said.